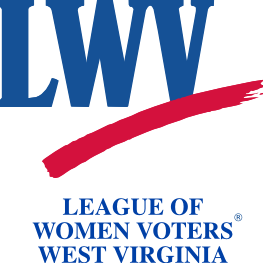 October 15, 2021
League of Women Voters West Virginia sent letter to Senator Manchin urging him to vote for and help pass the Freedom to Vote Act and the John Lewis Voting Rights Advancement Act.

Dear Senator Manchin:
On behalf of the League of Women Voters, thank you for your work to create a bipartisan solution to address
the disfunction of our voting rights systems. We write to request a meeting with you to discuss the critical
importance of continued efforts to increase access to the right to vote for all Americans, regardless of where
they live or who they are. As you know, there is growing urgency to pass the Freedom to Vote Act and the
John Lewis Voting Rights Advancement Act. These bills are essential to counter the unprecedented wave of
anti-voter laws advancing in the states and to protect Americans from unnecessary barriers to the ballot.
As a reminder, the League of Women Voters of West Virginia is a nonpartisan volunteer organization
working to promote political responsibility through informed and active participation of citizens in
government. The League of Women Voters of WV neither supports nor opposes candidates but is engaged in
local, state, and national issues of importance to our community. We thank you for all the work that you have
done thus far on Voting rights issues for the people of West Virginia.

As the U.S. Supreme Court noted more than a century ago, the right to vote is “preservative of all rights.”
Nothing is more fundamental to the fabric of civic life than the freedom to vote and the inherent authority of
the American people. But now, our nation is at a crossroads. The freedom to vote is under threat with a force
not seen for decades. Time is of the essence to seize every opportunity to ensure 2 every voice and vote count.
In your op-ed, published on June 6, you wrote, “The right to vote is fundamental to our American democracy
and protecting that right should not be about party or politics. Least of all, protecting this right, which is a
value I share, should never be done in a partisan manner.”  Right now, it is more important than ever to
protect voting rights as lawmakers across the country – including in West Virginia – advance legislation to
create barriers to the ballot box. All of them concern us. All of them make it harder for Black, Brown, Asian
American, and Native people to vote. And all of them need to change.

During the 2020 election, the lack of options for early voting in West Virginia, such as drop boxes, or
same-day voter registration kept many people away from the polls. Despite lifting requirements for
requesting an absentee ballot, West Virginians were required to apply online to receive their absentee ballots,
notwithstanding that West Virginia is among the states with the lowest levels of internet access in the
country. Earlier this year, the West Virginia Legislature introduced Senate Bill 565, which would create
barriers for West Virginians to participate in elections. The bill would push up the deadline for early
in-person voting and for submitting vote-by-mail applications and replace automatic voter registration for
people obtaining or transferring driver’s licenses with an opt-in option.

In short, the Freedom to Vote Act and the John Lewis Voting Rights Advancement Act each fill a distinct and
critical role in protecting the freedom to vote and ensuring elections are safe and accessible. When it comes
to our elections, we all want a transparent process we can trust, where Americans have equal freedom to
vote, whether we live in a small town or big city, or the coasts or the Midwest. Only passage of both the
Freedom to Vote Act and the John Lewis Voting Rights Advancement Act can make the promise of a
democracy that works for — and includes — us all a reality.
​
The national discussion about the right to vote freely and without discrimination must be elevated above the
bitter partisanship that has come to define so much of our modern politics. When we allow this rancor to
fester — and worse, when we allow it to define our healthy debate of critical issues — all people in America
lose. As you consider the legacy you will leave for generations of West Virginians, and in the spirit of
bipartisanship that expanded the franchise after centuries of violent prejudice and exclusion, we urge you to
join with your colleagues in passing these bills that are broadly popular across the country and so critical to
the future of our nation.
Thank you for considering our request for a meeting to discuss the state of voting rights and a path forward
for the nation. The eyes of history are upon us. Your leadership in this moment carries great weight, and we
look forward to working together to fulfill the promise of our democracy for all.

LWV STATEMENT ON HOUSE PASSAGE OF JOHN LEWIS VOTING RIGHTS ADVANCEMENT ACT
​WASHINGTON – Today the League of Women Voters of the United States board president, Dr. Deborah Ann Turner, issued the following statement after the US House of Representatives’ passage of HR 4, the John Lewis Voting Rights Advancement Act:
“The John Lewis Voting Rights Advancement Act will restore the Voting Rights Act to its original protections by reviewing and blocking anti-voter policies that too often target voters of color. We commend the House on passing this critical piece of legislation.
“Unfortunately, the US Senate is deadlocked on voting rights, which is why the League of Women Voters is calling on the White House to bring lawmakers together, remove the obstacles in the way, and work collectively on behalf of the American voters to see this legislation become law.
“Today, the League of Women Voters rallied with our democracy partners in front of the White House to demand President Biden use the full power of his office, live up to his commitment to the voters, and prioritize voters’ voices in our democracy.
“We cannot afford to wait any longer. We need the John Lewis Voting Rights Advancement Act and the For the People Act to restore and protect our freedom to vote.”
Tuesday afternoon, more than 200 voting rights activists and volunteers joined the League of Women Voters in front of the White House for ‘No More Excuses: Voting Rights Now!’, a rally calling on President Biden to deliver on his promise of voting rights.